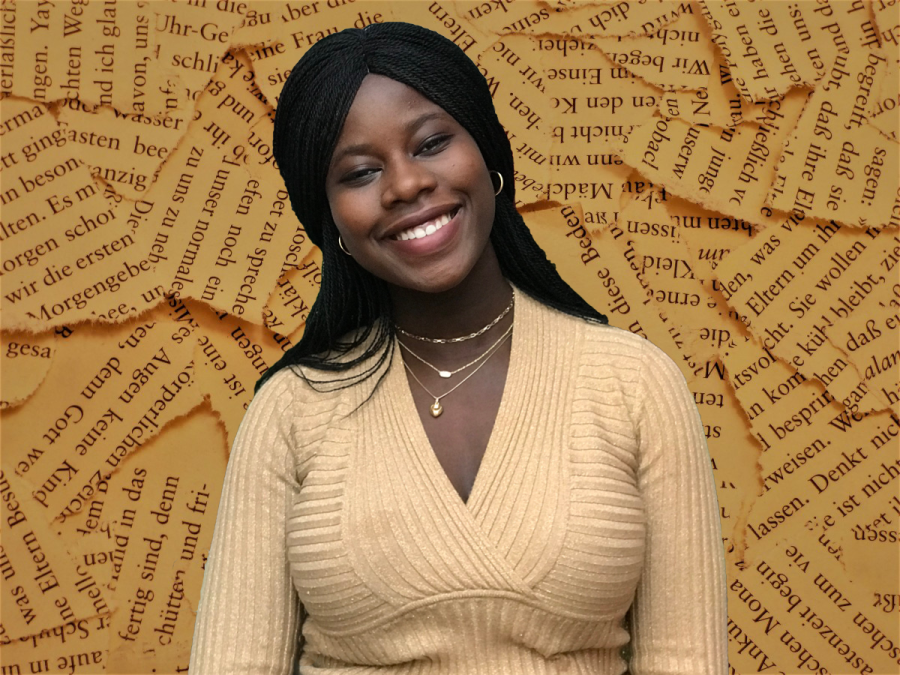 Senior Oluwatofunmi Jewesimi, who ranked as District Champion in UIL Poetry Interpretation last week, discusses what’s in a name?, a poem she published on Feb. 20 to address the struggle of having an ethnic name in the United States.

What led you to writing the poem?

It’s definitely gotten to the point where it doesn’t bother me anymore, but I also don’t like being told to suck it up and get over it because I feel like there’s a certain point where people aren’t even trying. I don’t have a problem with nicknames per se, but I do appreciate when people at least make an effort.

I do take pride in the meaning of my name, and I like when other people at least take the effort to see me rather than just another name that they can’t pronounce. I really enjoyed writing poetry since middle school, and so after having to encounter this issue, and seeing other people care about this issue as well, I decided to write a poem about that.

What’s your favorite line of the poem?

My favorite lines are “in this new country that places a heavy emphasis on accessibility [when it comes to ethnic names, it did not take long for me to realize how difficult it was to take pride in something no one else could understand.]”

In our neoliberal society, I feel like there is a lot of commodification that comes about, and I don’t think people really think about it that much. It’s not something that people realize until they are placed in the position where their name is continuously shortened down to something that other people can pronounce.

I’m from the Yoruba tribe. A lot of us do have our ethnic names, and there are also a lot of people whose parents chose not to name them an ethnic name because they knew that when they are coming to the United States, it would be a lot easier for people to not get discriminated against in job applications and college applications. I know a lot of people whose names were changed for that certain reason.

It’s horrible, but even our parents have to worry about this emphasis that our country places, and you don’t really think about how it even pertains to names until you’re actually the one that’s affected by it.

What are you hoping the poem does for students?

I hope people take pride in the cultures and identities that a lot of people have been forced to leave behind as they have to assimilate into this country. We still have like three fourths of our lives left ahead of us to live, and it’s not too late to change your identity to reinvent yourself to be rooted more in the themes that you actually like.

I feel like while my poem did speak specifically to Nigerians and Africans, I think it can also pertain to a lot of people. I really don’t mind if it’s even altered to speak not just about your names, but about other aspects of your culture and your identity.

I really think that’s something that people should be able to take pride in, and they shouldn’t have to be embarrassed about it or start resenting it because other people can’t understand it. I really hope that people would be able to take more pride in their cultural identity if they can, and for the people who don’t have such a difficult cultural identity to take pride in, I hope they can be more conscious of their friends who might come from those backgrounds, and they should be more willing to learn a little bit more about them.

I remember after my poem was played on Spartan TV, I had a few friends come up to me asking how to say my name again because they wanted to learn how to say the full thing. I felt really seen in that moment. People often know that what they see on my ID is not what I go by, but no one has really cared to ask how to say the actual pronunciation.

What is your name?

My name is Oluwatofunmi Jewesimi. It means “my God is sufficient for me.”