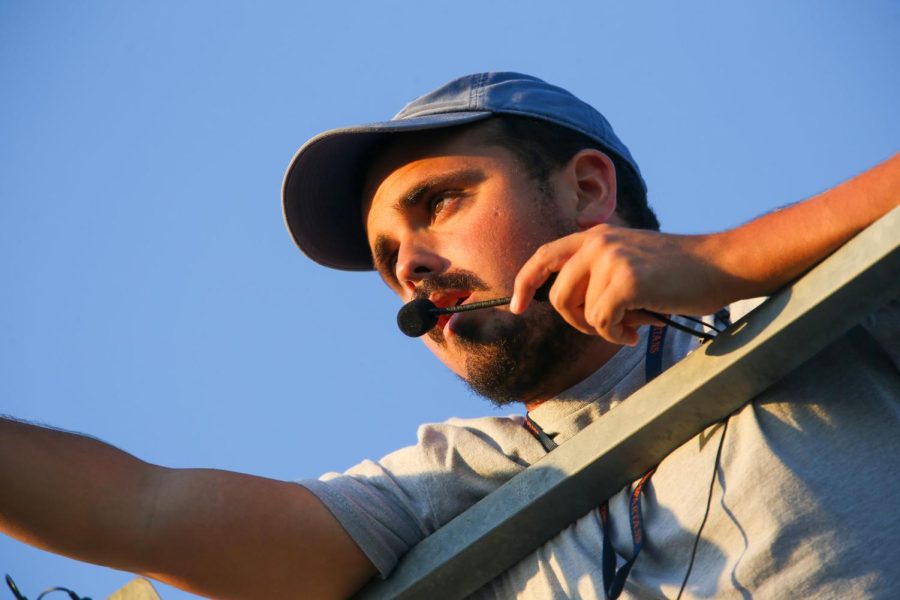 Q: What was the first real moment for you that got you into music?

A: I think the first real experience that really inspired me was at a community indie-rock performance in high school, held in an abandoned warehouse, with my friends. They used to have metal shows there, and I would go to these metal shows even though I didn’t like metal. There were two bands, Act Like Actors and Is Real Darling. It was the first time I’d ever seen people my age making music and writing vulnerable lyrics and just emoting without fear and almost being put on a pedestal for it, so after the performance, I bought the Act Like Actors CD, took it home, and listened to that CD a million times on my portable CD player.

Q: What is something that stands out to you about each student, each day they walk into the room?

A: Clearly their personality. It’s always about personality, wit, and humor. Sometimes their rougher edges, you know, and it’s everything.  It’s what makes the kids so unique. You know, some students get frustrated with certain practice techniques, so I try to avoid some of those and some kids just love certain practice techniques, so I try to lean into those, and that’s my favorite part of teaching forever is the personalities of the kids.

Q: If you were to pick between marching season and jazz season, which one would you pick and why?

A: If I had to pick I would go marching season because in marching season I love the outdoor aspect of it. I love getting on the tower and problem-solving. While I’m outside, I get to see a nice sunset. Usually, I get to be more active, so teaching dance or even just climbing down the tower and talking to the kids. I also feel that marching band is such an inclusive part of our program, where everyone is split into different bands throughout the whole year, but for marching band, everyone’s together at least at the football games and the competitive show. And it’s just so inclusive.

Q: When did you decide you wanted to become a band director?

A: When I was in high school. I loved my band director a lot for changing my life and for believing in me before I gave anyone else a reason to believe in me. I was a little bit of a troublemaker, and I was lazy, but I just loved playing music, and so I tried really hard in the band and it showed me how to apply myself to English and math and to actually apply myself in a way that was meaningful because I started to see what being good at something how good it made me feel.

Q:  Out of all musical instruments, what are your favorites to play?

Q: What has been the best advice you were given as a band director?

A: Don’t take yourself too seriously. That’s always very hard to do. You know you can get frustrated or think everything’s about you.

Q: How did you come up with the name Oh Hooray for your band?

A:  I have been creating this album since 2017, but I was not planning on releasing it because I was just making it for myself, and when I met my current girlfriend, Sara, she encouraged me to release it. And I was like, “Okay, we’ll try.” So I talked to my friend, Dustin, and we started to get some plans together to mix it and master it and all that stuff, but I didn’t want to just put my name on it. I wanted to create a moniker of some type, some type of thing that I could not put on my profile. So we created the alias overlay and I liked it because it’s almost like you’re being reminded to be excited. It’s not like you’re saying hip hip hooray. It’s like, “Oh, alright,”  just very casual.

Q: What is the story behind your new album “Lost As Moths”?

A: Well, the concept of it is when you feel like you get stuck in a cycle of chasing things that give you no happiness, no joy, you know, like a moth swarming around a lightbulb. You know whether it’s like, I want to get the new video game console or I want to get this new pair of shoes or it’s these things that don’t necessarily make me happier. But I still feel like I’m inclined to chase them for some reason. And rather than chasing things that are meaningful to me, which could be friendships, my family you know, my music, there is a meaning behind it.

Q: What are some of the best moments that you have had, since becoming a teacher here at Seven Lakes?

A: My first great moment here was the first time we did ensemble last year, and we just were so unsure if anything would work out with the pandemic. If we would ever be able to play music, we’d be able to rehearse and we did the first ensemble and the kids were excited and cheering and just happy.  This year, the first time we did the full show was memorable because this was such a hard show to put together. All of you came off of the field and cried in joy. It was very beautiful.

A: There’s something I’ve been working on all year. I knew that this would probably be my last year mid marching season because I could just tell I definitely want to pursue my music but that gave me time to put into planning a gift of sorts to the band. Now just as far as what I hope you guys take from my teachings when I leave. It would be my biggest advice that I always want to take with me and that I hope that my students take with them too, is to never give up on being kind and patient and forgiving, and to  On your innocent heart, be kind and patient and unassuming because you’re going to find that you’re going to get the best out of people when you do that. It’s not a weakness.