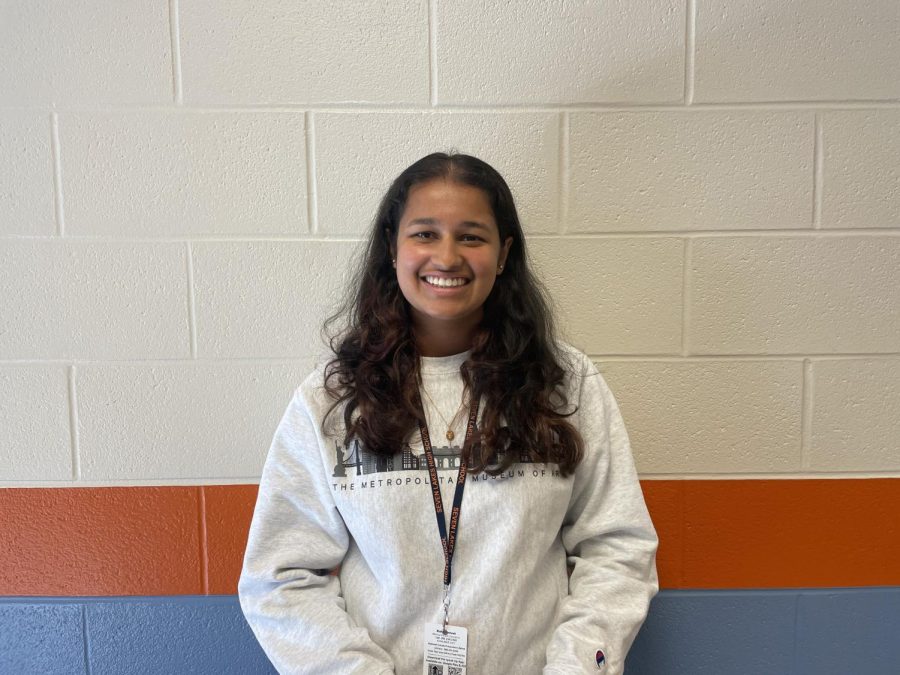 Q: Why did you decide to run for homecoming court?

A: I ran mainly for band. I was talking to my friends about it, and they were all like “Oh my god, you should run,” and it wasn’t super serious. I just did it to represent the band because they mean so much to me. They all kind of collectively decided, “You’re gonna do great, you’re gonna do fine,” and I was like, okay, we’ll see what happens. I’m just grateful that it turned out like this.

Q: How did you feel when you found out that you were the HOCO queen?

A: I felt excited. It was really cool because the guy who became king was also in band. We both serve as drum majors together, so it was really cool. At that moment, it didn’t really feel like a win for me or him. It felt like a win for the band, which I know is kind of cheesy but that’s just how I felt because those people work so hard and I see them every day. The whole concept of it was for them.

Q: Did you do anything special to celebrate becoming HOCO queen?

A: The day after we had a competition for band, so I didn’t really get to do too much. I spent time with my family, my uncle and my aunt, so they congratulated me. This past weekend, they came over for dinner, and they were like oh, good job, so it was nice.

Q: What was your favorite moment from homecoming?

A: My favorite moment was getting up on the podium and conducting afterwards because it was so cool and the weather was so nice. On top of that, we did a postgame performance that night, so my director let me conduct in the dress. I think seeing everyone after the fact because everyone was so excited, that was probably my favorite part of the whole day.

Q: What clubs or extracurriculars are you involved in and do you have a favorite?

A: Currently, I am involved in NHS, Science National Honor Society, Asian Culture Club, and Tri-M National Music Honor Society. My favorite one is National Music Honor Society because we get to do this thing called Sunrise, and it’s where you go to this retirement home and play for people. It’s during the holiday time, and we just get to meet them and they’re all so excited to hear us play. That’s one of my favorite parts because you get back to your community and you get to learn about all these people who live here.

Q: What is the first thing you do when you wake up in the morning and why?

A: The first thing I do in the morning is check my phone, not necessarily if someone has texted me or anything – it’s just to check the time. I have this fleeting fear that I am waking up super late or something, and so checking the time is very important to me. It’s why I wear my watch. It’s why I have a horrible watch tan. I just like to know what time it is and if I’m running late because I really don’t like running late.

Q: What was the last thing you read, heard, or saw that inspired you?

A: One of my friends told me something. It was from band but I think it applies to everything: you’re only as strong as your weakest player. It tells you that even in a team, you have to have equal contribution within everyone. If someone is doing the absolute most and someone is not giving their all, then that affects the team and so everybody has to be willing to give it all in order to make something work.

Q: What motto or quote do you live by?

A: This one’s stupid but I think it also applies to all of high school. On my parking spot, I wrote YOLO. I know it’s very 2014 of me, but I really think that it applies to everything. You really only live this life once. The most important thing is to make it count and on top of that, the most important thing in my life is always the people. The people who you surround yourself with, people who you talk to every day, they are a conglomeration of who you are. So I think you live once and you live once, only with these people. It’s really important just to enjoy that, to treat people how you want to be treated, and that’s how you live life, that’s how you make the most of it. I guess that’s the secret formula.

Q: What would your friends say is your best quality?

A: My patience, which is a strange one because I personally don’t think I have a lot of patience, but everyone always tells me because of band and all these things I’m involved in. My friends say, “You have a very long string of patience, it takes a very long time to push you over the edge,” which is a good thing, but I think that just comes from trying to be understanding of everyone’s situation. We all go through so much, even for the ages of 14 through 18, and so just to understand that everyone has things going on. You can’t harp on people for things that are going on at home, and it’s better to be understanding than to be attacking them.

Q: Is there anything else that you’d like to add about Homecoming or just in general?

A: I’m just really glad it happened. I’m excited it happened, and I’m thankful for everyone who voted and for those of you didn’t vote, you guys are cool too. I appreciate you.